I recently discovered a Cheese Potato Bread recipe on YouTube. Though it was a nice recipe, I thought I could improve on the flavour. I have made this recipe many times and have had several versions. Here, I have compiled the four best and I will explain how I improved the flavour of the basic filling and also how I came up with the other three fillings.

What changes did I make to the Cheese Potato Bread recipe?

In the original recipe, mayonnaise is added to the mashed potato to keep it moist. However, in my version, I have replaced the mayonnaise with milk and butter to create a creamier mash with a richer flavour. This is a more classic British mashed potato. You could also change the type of potato you use to improve the mash, I personally like the ‘Yukon Gold’ variety, but you can use any floury potatoes. Generally baking potatoes work best.

For the original recipe, they chose Mozzarella cheese, and for the most part, I stuck with that. But I used two different types of Mozzarella here. The first is a fresh block of Mozzarella that I cut into thin strips. The second is pre-grated Mozzarella from the supermarket. They both have their own flavours and melt differently.

I also experimented with several different cheese’s including: Cheddar, Red Leicester, Gouda, etc. I found that the best cheese’s to use where Fresh Block Mozzarella, mixed with Provolone and Gruyère, when these melt they give a fantastic ooze and a nice stringiness. Also the 3 cheese flavours really balance each other out.

What are the fillings?

After many experiments and getting family and friends to do numerous taste tests for me here are the fillings I went for, plus an extra one not mentioned below in the recipe:

I wanted to do one Cheese Potato Bread that was just an improvement on the original. Other than replacing the mayonnaise in the mashed potato with milk and butter. I have replaced the Mozzarella, with a mixture of fresh block Mozzarella (50g), Provolone (25g) & Gruyère (25g).

I really recommend eating this bread with honey, as it adds a little sweetness and makes it even more delicious.

For this one, I really wanted to lift the flavour of the potato and keep the 3 Cheese mixture mentioned above. I opted for the Irish classic, Champ. The simple addition of plenty of finely chopped green onions (spring onions) into the mashed potato really gives it a boost! Like a supercharged version! You can also eat this version with honey too, if you want a little sweetness.

I took the inspiration for this filling from a recipe I made quite sometime ago: So-called Roast Pork. In this recipe I mixed mashed potatoes with diced onion and mushrooms then wrapped it in bacon. For the bread filling I mix the mashed potatoes with diced bacon, onion and mushrooms. You want to use Chestnut Mushrooms or King Oyster Mushrooms for this. With the cheese I simply used pre-grated Mozzarella from the supermarket, as it keeps a nice balance with the flavour. I would not recommend eating this with honey.

This was the firm favourite from all the taste testers, young and old. The sourness and sweetness from the apple goes so well with the earthy, spiciness of the curry powder. Plus cheese and apple are a superb pairing, mixing all this together creates a wonder and very addictive flavour combination. I went for the pre-grated Mozzarella from the supermarket again on this bread, as I didn’t want the cheese over powering the curry.

For the Horseradish filling simply add 2 teaspoons of Horseradish sauce (one made with single cream) to your mashed potato portion (100g) and use the pre-grated Mozzarella from the supermarket. Honestly, this is super delicious! However, I wasn’t sure everyone would enjoy the heat from the horseradish, so I didn’t include it in my recipe or video.

Let me know your favourite filling in the comments below. 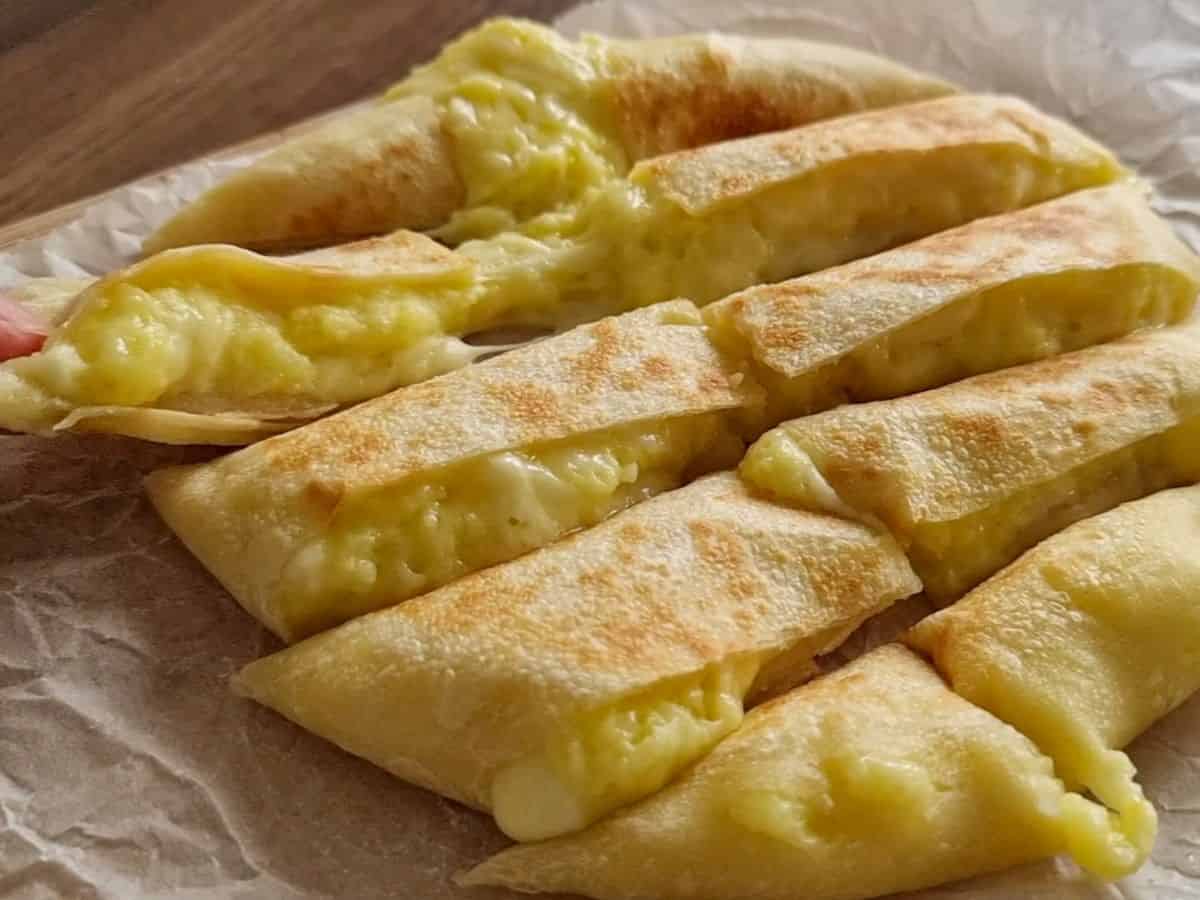 Other Posts You May Enjoy

How to Make Hot Cross Buns

How to make Burger Buns